Meet the experienced and friendly doctors and staff who make ViewPointe Vision the leading provider of vision care products and services in Omaha. 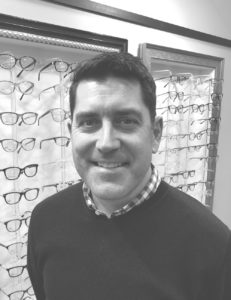 Dr. Klemke grew up in western Nebraska, in the small town of Oshkosh. He attended the University of Nebraska-Lincoln from 1992-1996, earning his Bachelor of Science degree in Biological Sciences in May of 1996. He then attended Indiana University where he earned his Doctorate of Optometry in 2000. After graduating, he practiced in both Kansas City and Denver, before returning to Nebraska in 2002. For the next three years, he worked in a medical/surgical practice here in Omaha before founding Elkhorn Ridge Vision in the spring of 2005.

Dr. Klemke enjoys treating patients of all ages and has special interests in complicated contact lens fittings, as well as the treatment and management of ocular disease and mild trauma. He is also a member of both the American Optometric Association and the Nebraska Optometric Association. Above all, Dr. Klemke says that the most enjoyable aspect of his work is meeting so many great patients, and getting to know them and their families over time. He strives to achieve a level of comfort and care with each of his patients so that they truly feel at home while in the office. He also makes it a point to educate his patients about their current eye and overall health conditions, as well as methods that they can use to help prevent future eye health problems.

In his spare time Dr. Klemke enjoys spending time with his wife, Terra, and their two sons. Dr. Klemke is an avid golfer, enjoys reading, and closely follows Husker athletics. He and his family attend St. Wenceslaus Catholic church and are active in many church, school, and sports-related activities there.
After 10 years of growing his practice, Dr. Klemke opened the doors of a new larger office re-branded as ViewPointe Vision. 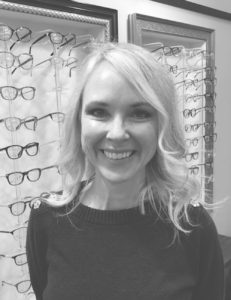 Dr. Ariann Brown was born and raised in Grand Island, Nebraska. After graduating from high school she moved to Lincoln and attended the University of Nebraska-Lincoln. She graduated with a bachelor’s in Psychology and a minor in math and science. Once completing her undergraduate degree, she went to the University of Missouri-St. Louis for optometry school. After graduating with honors, Dr. Brown moved back to Nebraska and worked in a medical/surgical setting for nearly 10 years until joining the ViewPointe Vision team in 2015.

Dr. Brown enjoys managing patients along many different avenues, from your basic annual examination to chronic glaucoma patients and diabetics. She is also a member of both the American Optometric Association and the Nebraska Optometric Association.
In her spare time, Dr. Brown enjoys spending time with her husband and two girls. You can oftentimes find them cheering on the Huskers. Her interests include photography, scrapbooking and she is a member of Western Douglas County Rotary.

Originally from Grand Island, NE, Dr. Nordhues attended the University of Nebraska-Lincoln where he earned a bachelor’s degree in biochemistry and a minor in psychology. He went on to graduate from Southern College of Optometry in Memphis, TN. During his rotations in school, he was able to attend two medical co-management clinics in Omaha where he learned to refine his skills in medical optometry, including dry eye, glaucoma, macular disease, and surgical co-management.

Dr. Nordhues has a particular interest in treating dry eye and will be focusing on effective treatment options for this chronic issue with the latest science and technology. Dr. Nordhues also enjoys pediatric exams, especially since he personally understands how important good binocular vision is. After his binocular disorder was treated in optometry school, he has a special interest in making sure school-aged children and young adults are not only seeing clearly but comfortably. Dr. Nordhues is a member of the American Optometric Association and the Nebraska Optometric Association.

Dr. Nordhues and his wife are avid Husker fans, enjoy the outdoors, and love spending time with their two young kids. The Nordhues family are active parishioners at Christ the King and enjoy meeting regularly with their small group. When he’s able to, Dr. Nordhues likes playing tennis, dancing, and seeing the latest Broadway musical at the Orpheum. He is very excited to build relationships and provide exceptional care to all his patients.

“Such an amazing experience! I never knew going to the eye doctor could be so easy! No waiting and the staff was fantastic!!”

You can schedule your next eye exam with us online!

Leave Us a Review

Please take a moment and let us know how your experience was.